12/02/14 - Weather is looking bad for our promised launch date next week. We may have to postpone until the wind dies down or our payload will fly halfway to Denmark and land in the North Sea. Securely attached to the extension arm, Lego captain Alan and co-captain Steve are on standby, waiting for the jetstream to settle down. 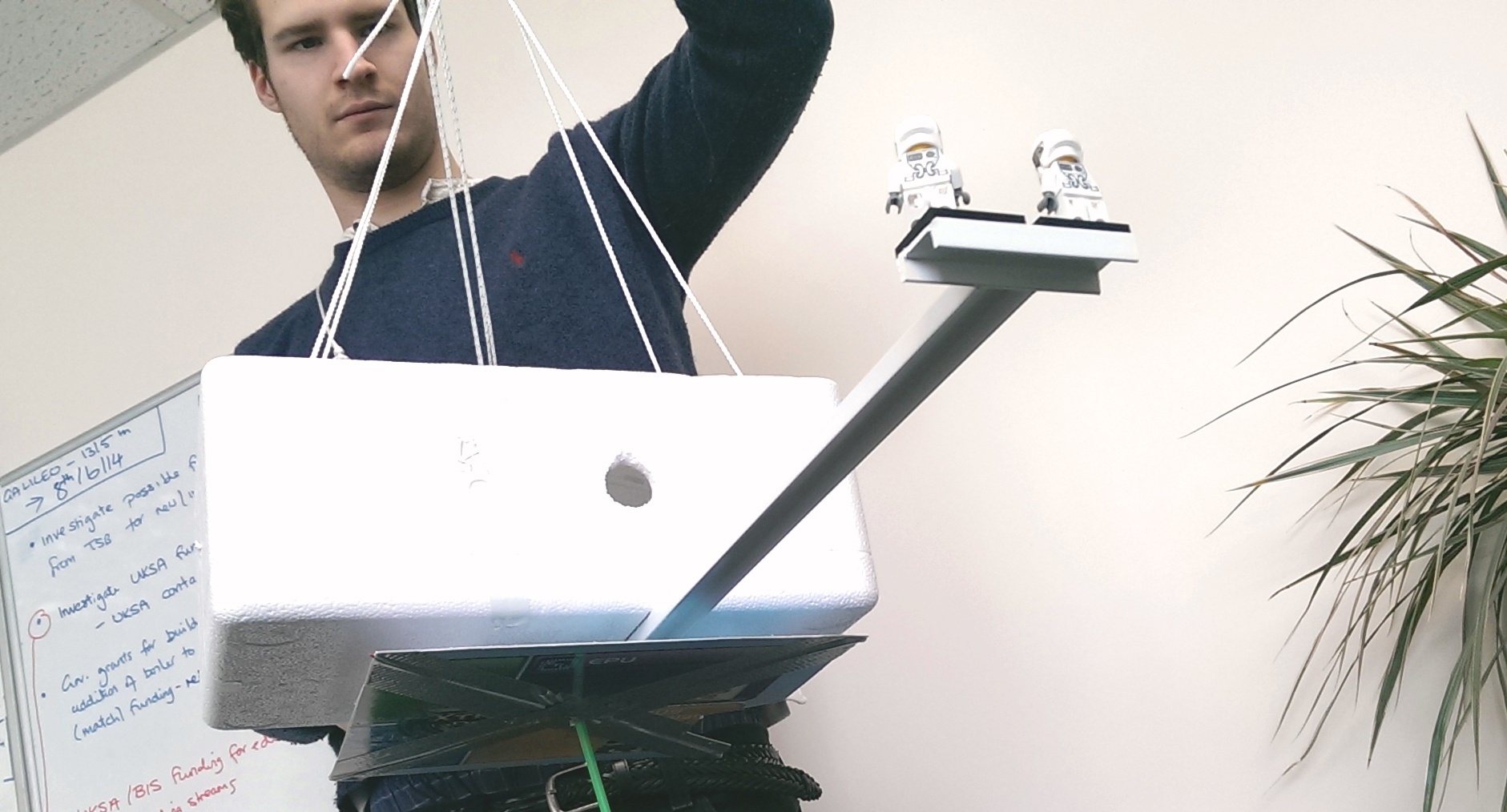 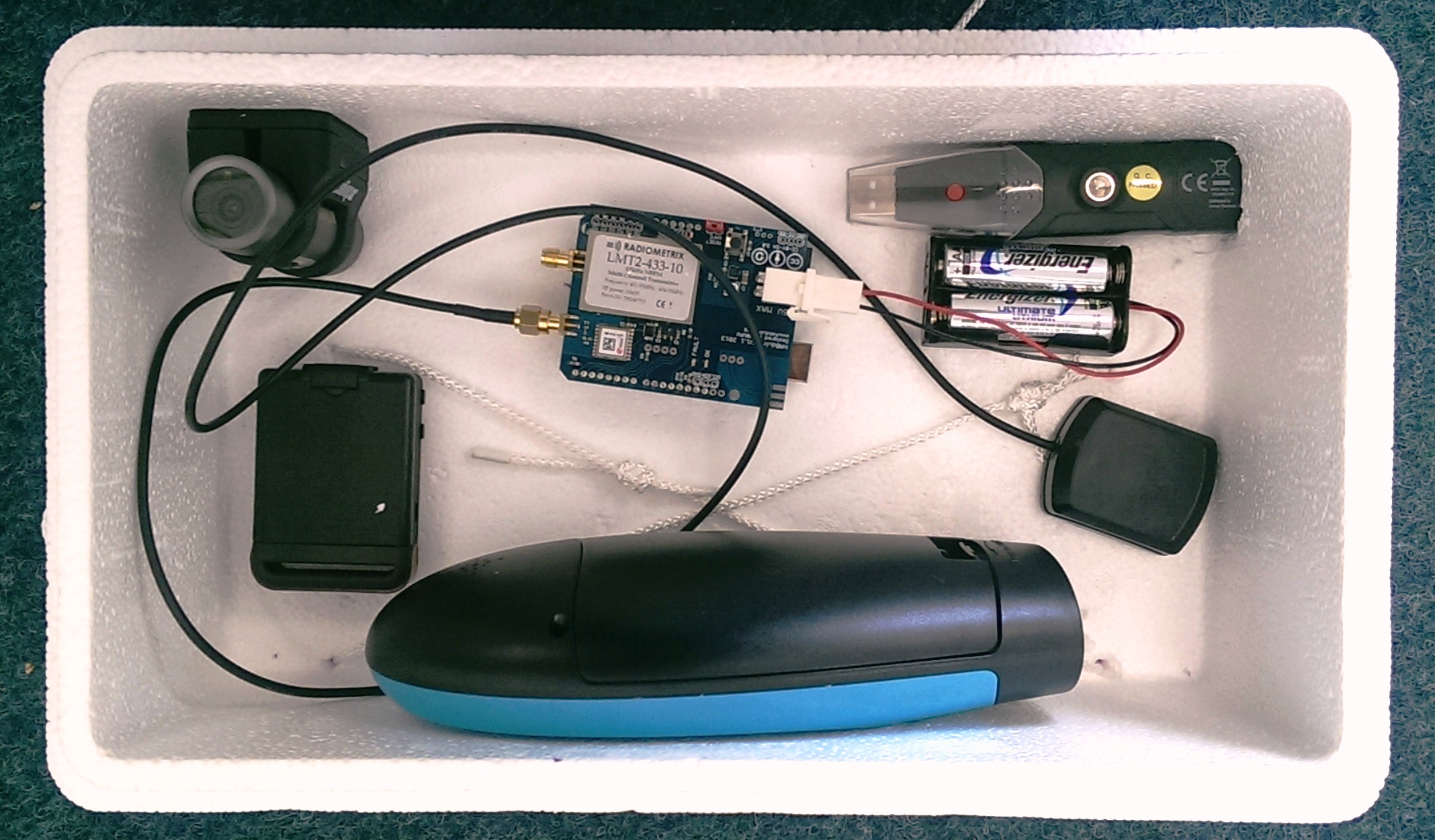 25/02/2014 - Having designated Tuesday the 25th as launch day, the first check of the day was to confirm the predicted flight path was safe and had a landing location at least 20km from any coastlines. Using the CUSF online landing predictor, we entered our balloon, payload and launch time details and were shown an ‘S’ shaped flight path with a landing location around March, Cambridgeshire.

With a safe flight path confirmed, we began preparation. Firstly a launch location was prepared, including a tarpaulin sheet, the hydrogen cylinder with the hose attached, and the balloon and lift test weights ready for fast assembly. 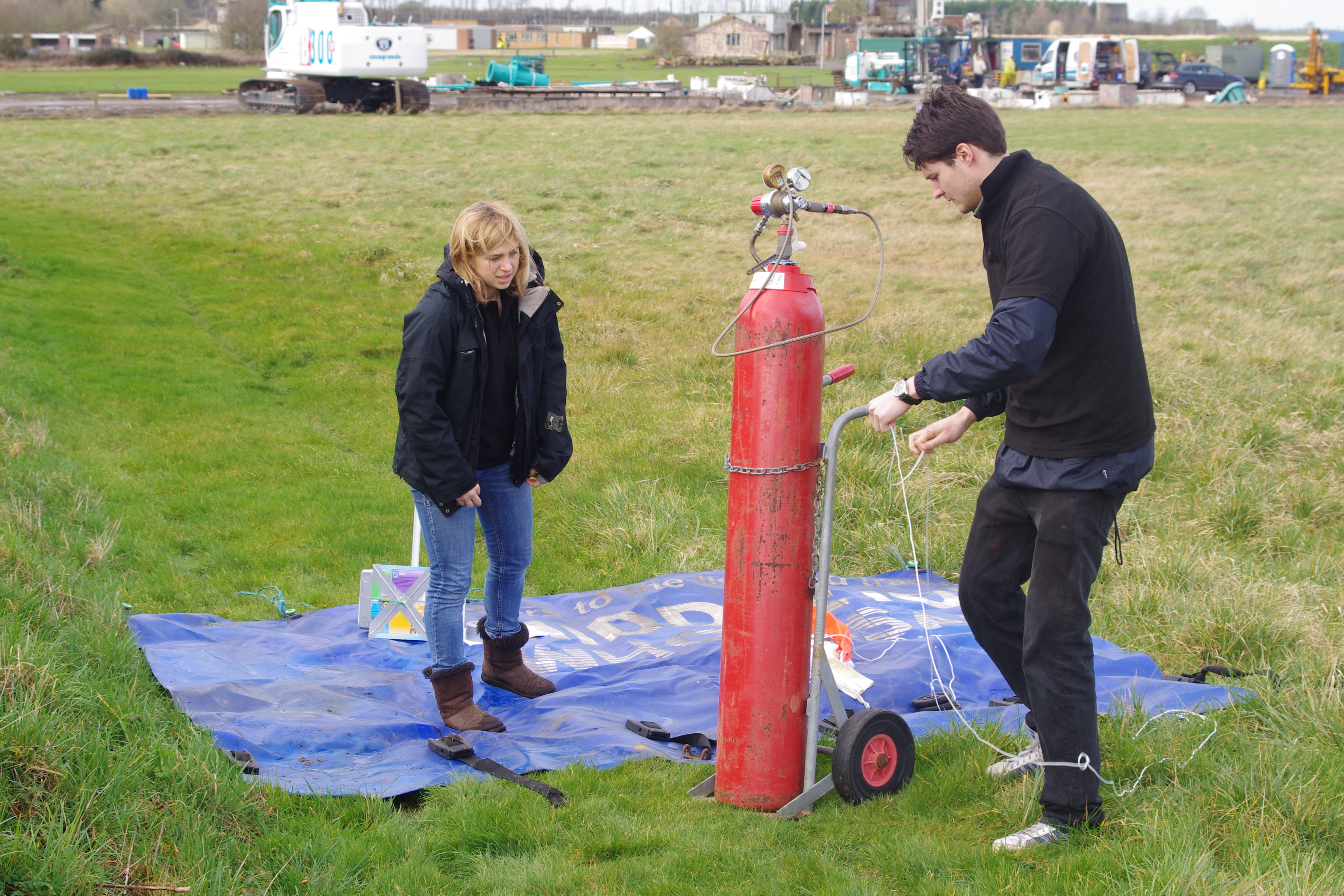 With a launch location ready, the next procedure was to make up the payload – with all equipment activated, recording and ready to launch. This involved switching on and setting the cameras and data logger to record, as well as activating the Habduino radio tracker and checking that it is recieving GPS (which is indicated by a green flashing LED). Finally the SMS tracker was activated and programmed to send a GPS position every 20 seconds to the smartphone we were using to track. Once we were recieving valid GPS positions on our smartphone, we could then strap our payload equpment into place, including a handwarmer on each electrical item, pack the box with polystyrene pellets and seal it ready for launch. 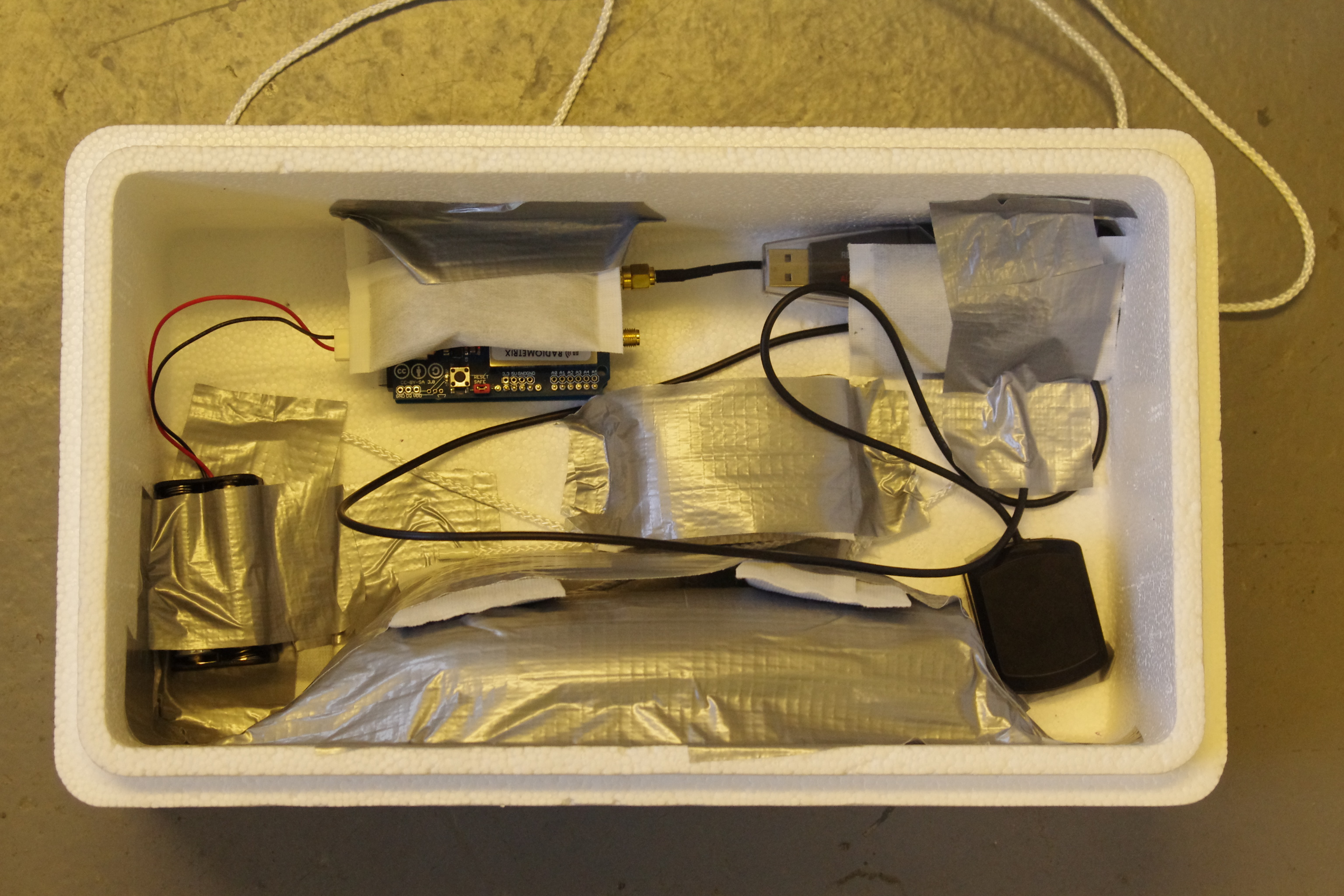 With an activated payload, it was important to minimize the time before launch, so not to waste the battery and recording time of the onboard equipment. The payload was then taken over to the launch location, and tied to the balloon neck via the parachute. The balloon neck was also tied to the hydrogen cylinder via the 3kg lift test weights, as a safety line (that would be cut before release).

With everything ready to go at the launch site, we began inflating the balloon. The target lift of the balloon was around 3kg, therefore we filled the balloon until it began to have neutral buoyancy with the 3kg test weights. The correctly inflated balloon ended up with a diameter of around 2m. 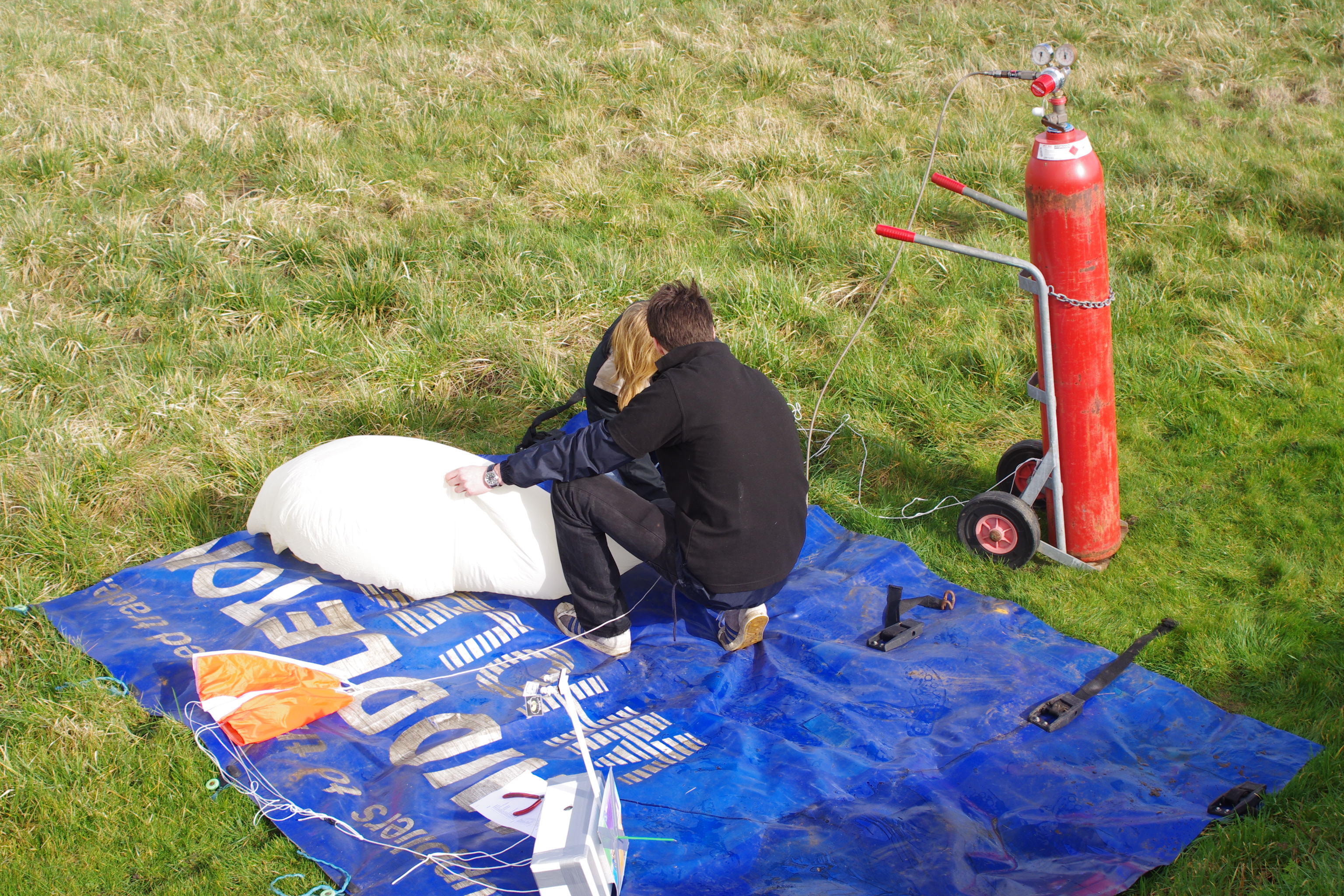 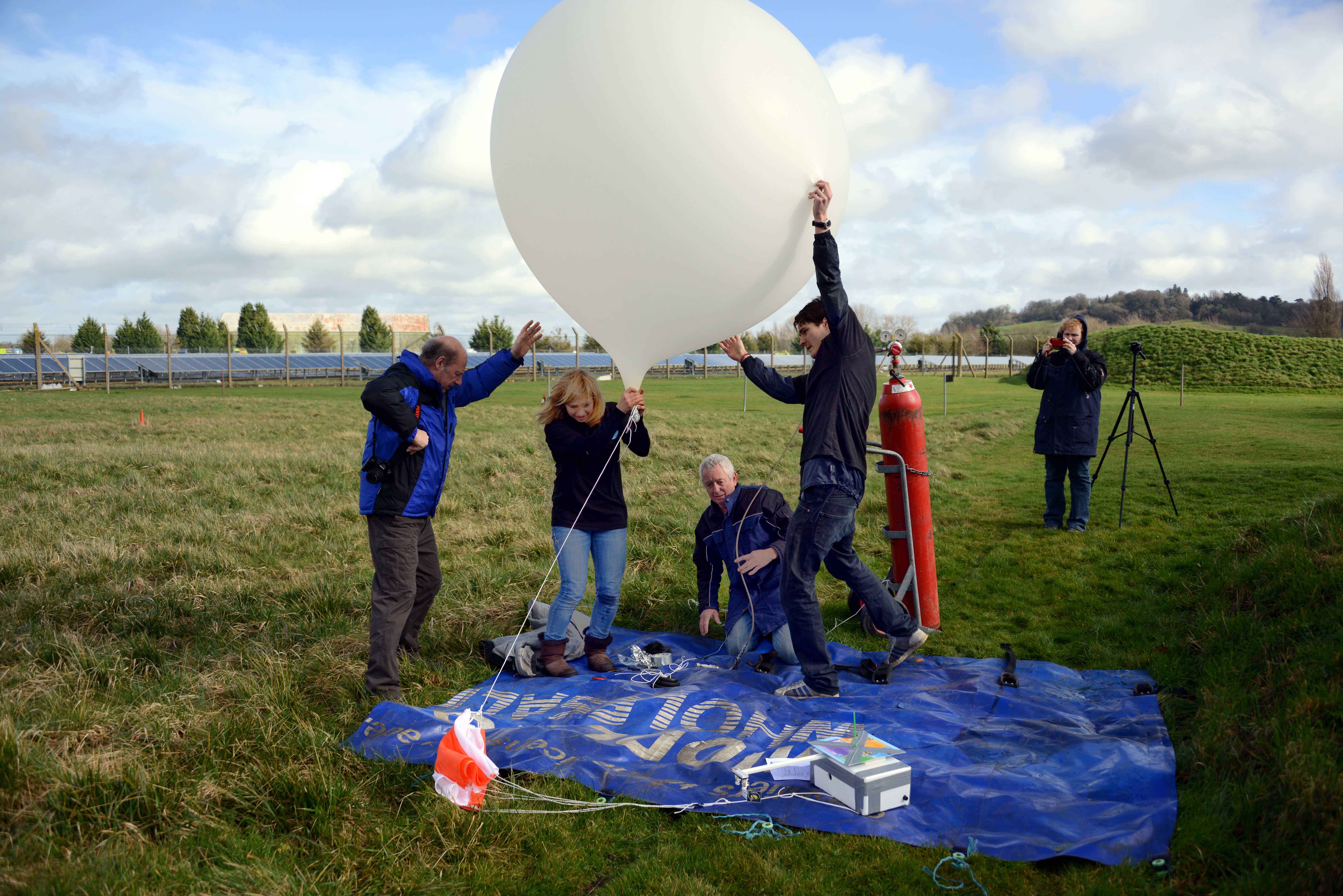 During the entire filling and pre-launch procedures, we were receiving GPS data from the payload which ensured that the payload would be traceable and was ready to be launched. We then cut the safety line and slowly let the balloon rise by releasing the string gradually until we just had hold of the payload box.

Once the balloon was stable and there was a lull in the wind/gusts, we released the balloon and payload to begin its flight. 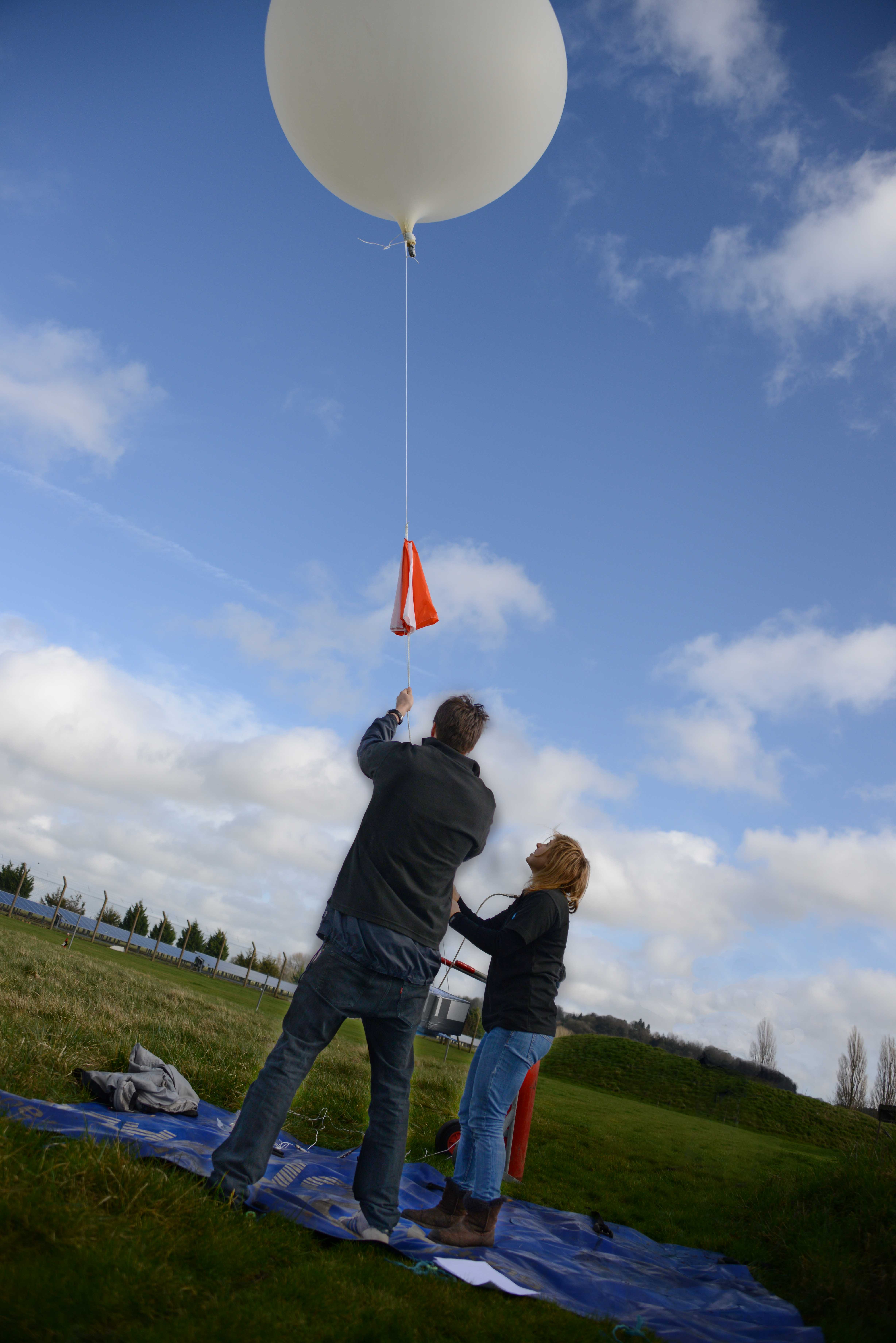 With a final salute, we watched the balloon disappear into the sky, meanwhile receiving 20 second SMS position updates. 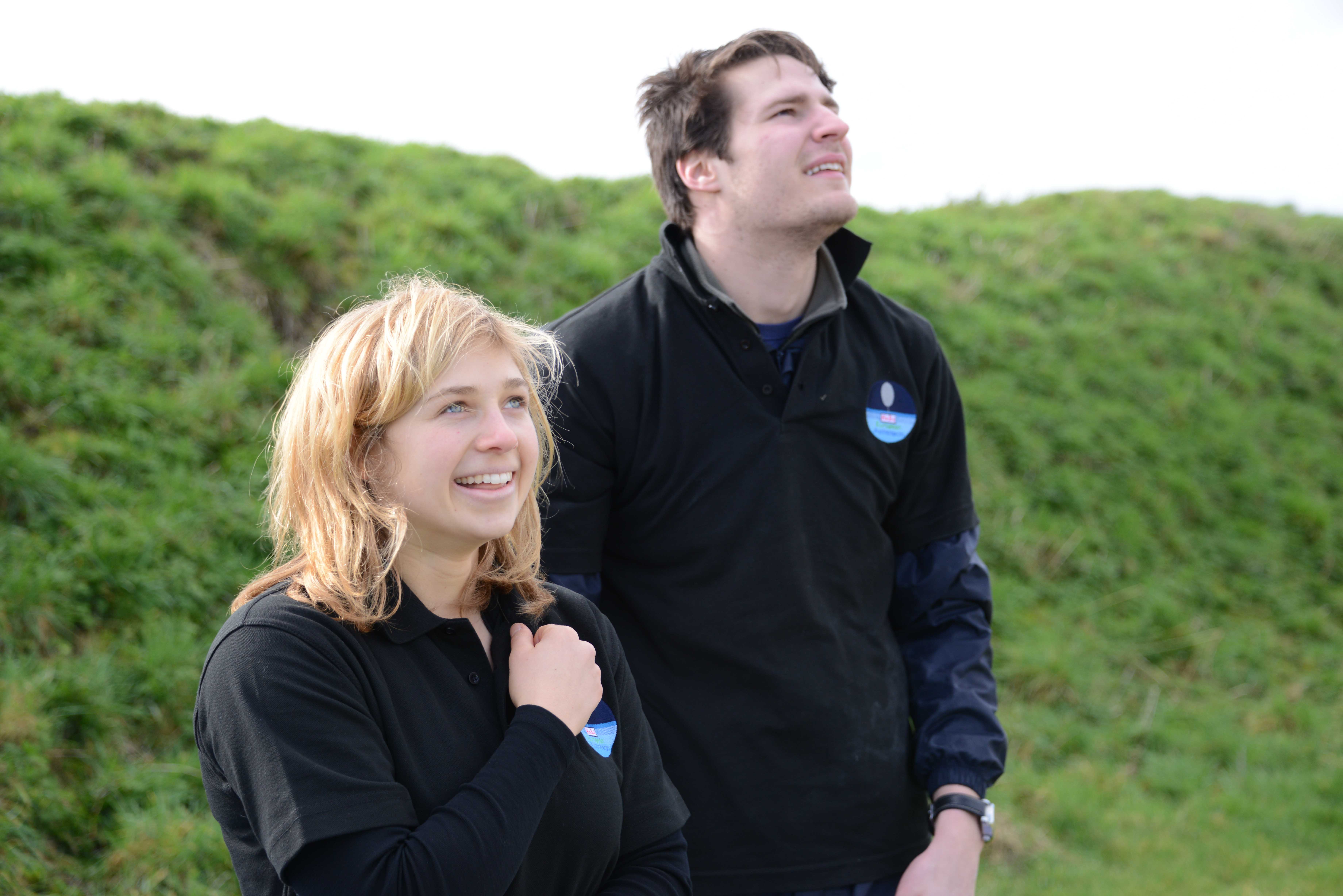 Immediately after launch we logged on to the #highaltitude internet relay chat (IRC) to inform people of the launch and give our radio transmission frequency (434.65MHz) for other people to track and upload to the spacenear.us online tracker. Fortunately, at around the same altitude, the first telemetry string from the radio tracker was uploaded to spacenear.us and the position of the payload was tracked via radio transmission beyond 1000m altitude.

The final tracked flight path can be seen below on spacenear.us. 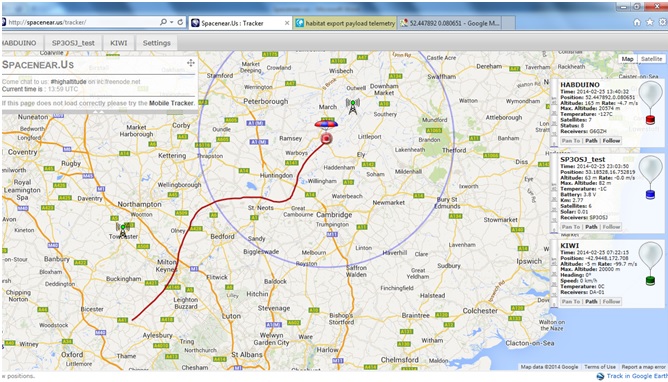 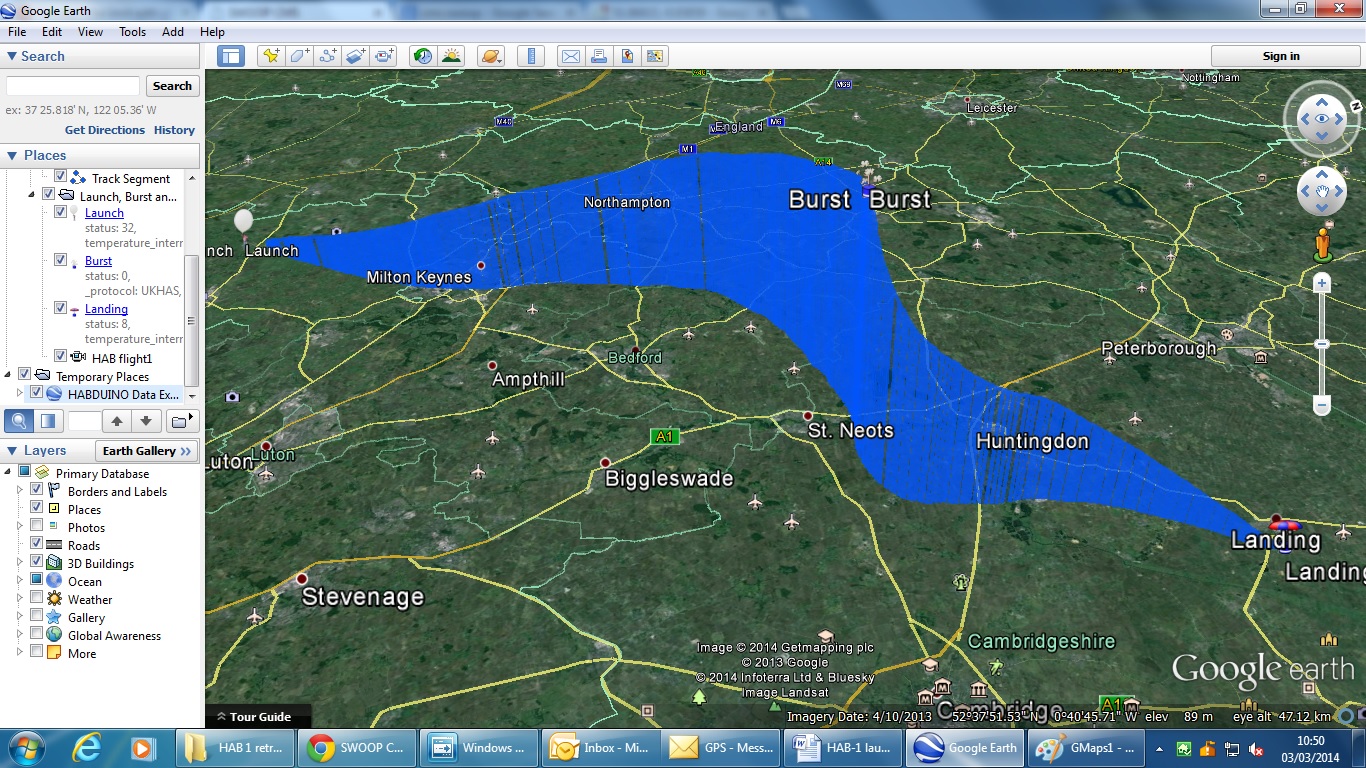 The graph of altitude with time is shown below via spacenear.us, displaying a steady climb of around 6m/s followed by a fast descent that slows to around 9m/s before landing, and an overall flight time of 1hr 35mins. 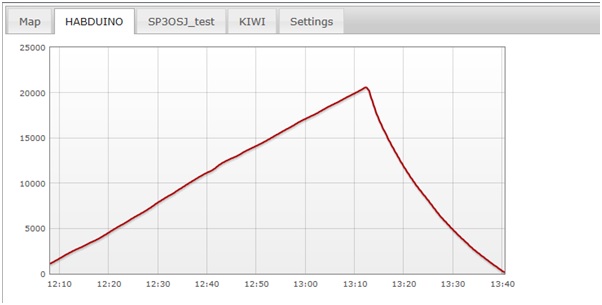 The last radio telemetry string received and uploaded to spacenear.us was at an altitude of 165m, and showed a descent path leading into a brown field. Fortunately, at around 1000m altitude, the SMS tracker started receiving signal again and the 20 second position updates kicked in again giving the path in to landing and the final resting place as is shown below. 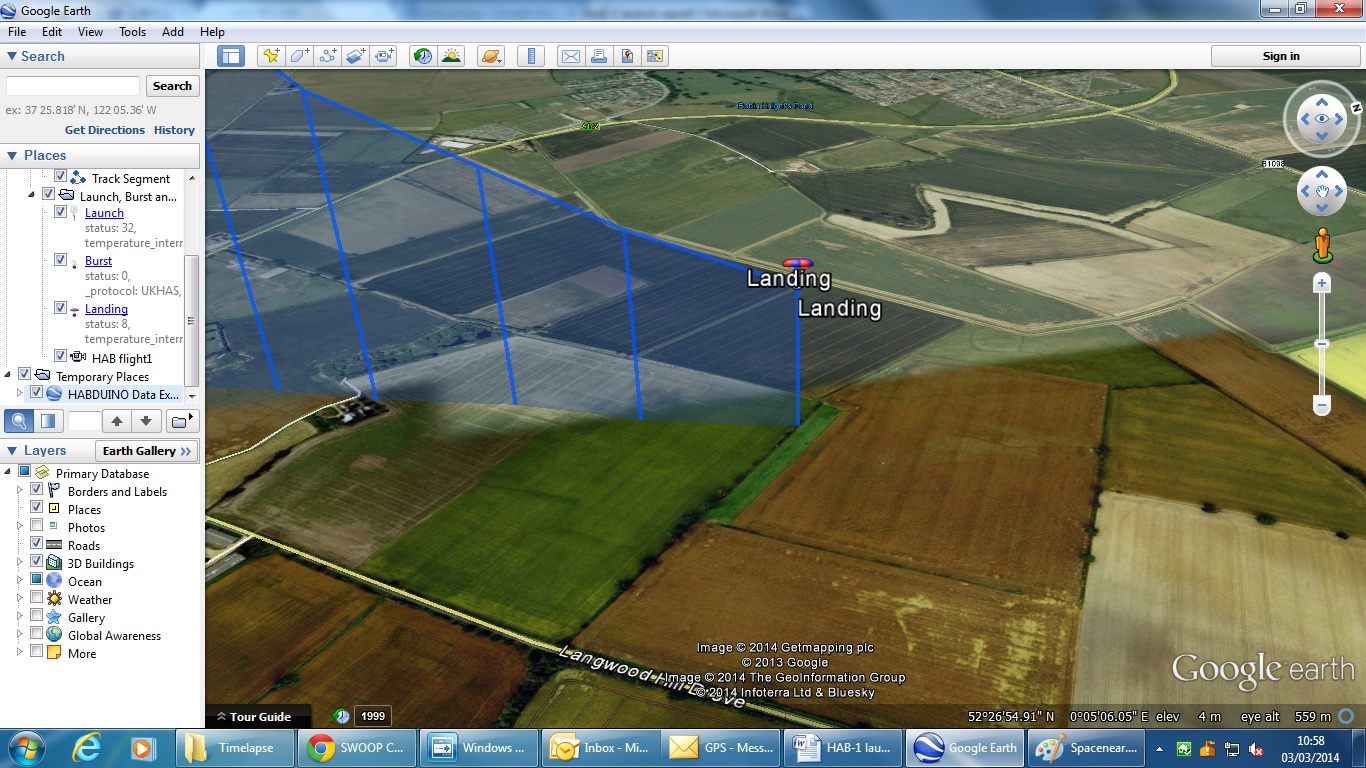 With the final position, we simply pulled over on the road to the south of the indicated field, walked in and found the payload in the exact position in the field indicated by the SMS tracker. 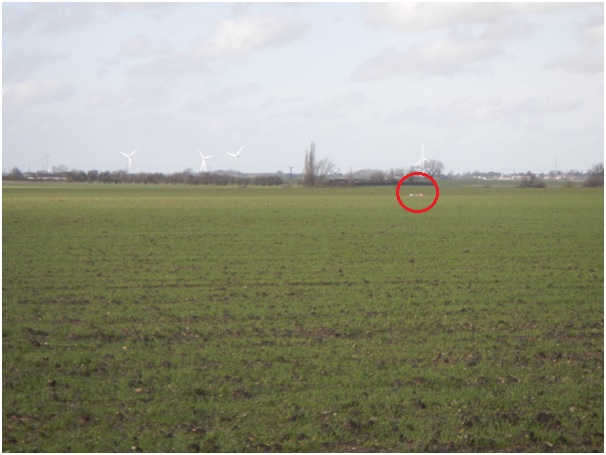 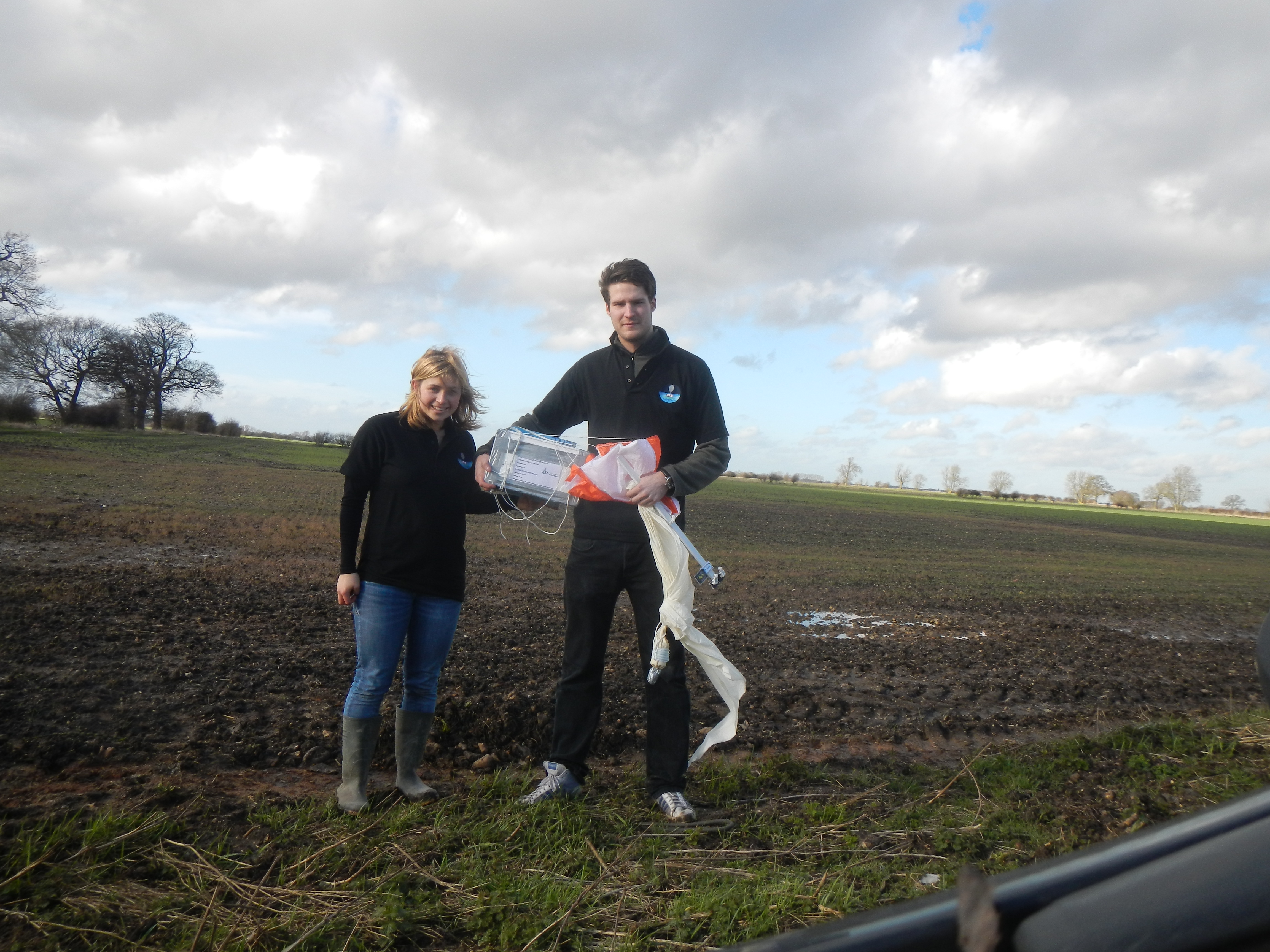 Having successfully recovered the relatively undamaged payload, a few areas for improvement were apparent; most notably that the inside of the camera lenses had accumulated some condensation. Despite this the cameras managed to capture some great pictures, and the data logger recorded the conditions very well; an all round successful test launch!

First Images are available from the edge of space. 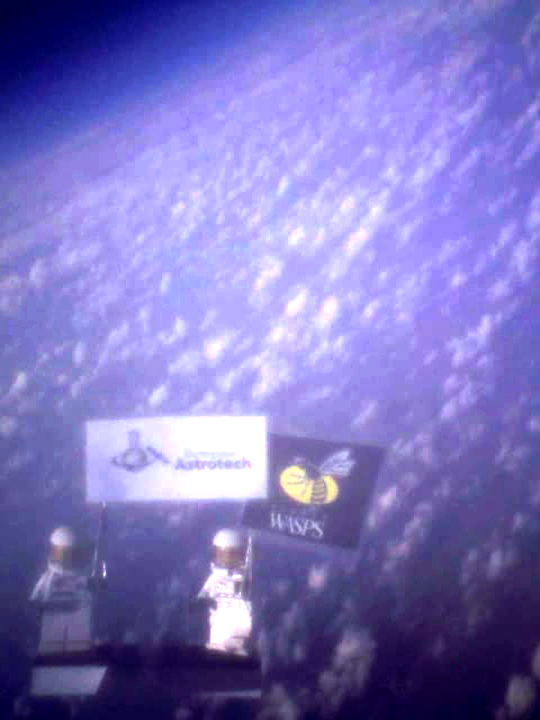